The Akida device was produced at a Taiwan Semiconductor Manufacturing Company (TSMC) foundry and utilizes a standard logic 28nm process. The Multi-Project Wafer (MPW) used by the Company in April 2020 in order to accelerate the delivery of the integrated circuit engineering samples, provided packaged and tested devices for internal validation and testing in August 2020. These devices will support the demands of customers participating in the Company’s Early Access Program (EAP).

The Akida NSoC neuron fabric is comprised of cores that are organized in groups of four to create nodes, which are mesh networked. The cores can be implemented for either convolutional layers or fully-connected layers. This flexibility allows users to develop networks with ultra-low power Event-Based Convolution as well as Incremental Learning. The nodes also can be used to implement multiple networks on a single device. 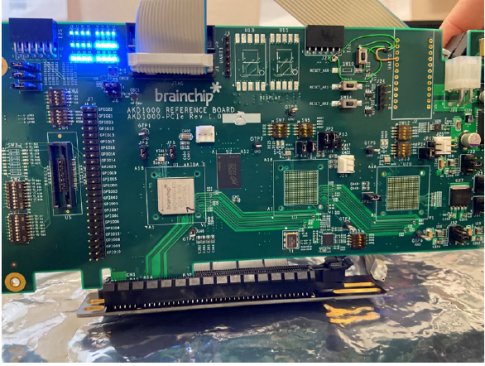 The NSoC will be available in an M.2 PCIe format card and a USB alternative. Device drivers and SDK with example neural networks will be provided for both Linux and Windows operating systems.

Louis DiNardo, BrainChip CEO commented, “We have validated the functionality of the Akida silicon and performed significant testing. The devices received from the MPW will provide engineering samples and evaluation boards for our early access customers. Now our focus is on continued development of software and firmware drivers. We expect to produce a production mask set in the fourth quarter of 2020 and then move forward with volume production wafer fabrication, assembly and test operations.” Mr DiNardo continued, “The BrainChip team is very proud of this significant achieve and milestone in our quest to introduce Akida and achieve commercial success with a revolutionary product that solves the real-world challenges of implementing artificial intelligence at the Edge.”