If you want to compound wealth in the stock market, you can do so by buying an index fund. But investors can boost returns by picking market-beating companies to own share in. To wit, the BrainChip Holdings Ltd (ASX:BRN) share price is 68% higher than it was a year ago, much better than the market decline of around 14% (not including dividends) in the same period. That’s a solid performance by our standards! On the other hand, longer term shareholders have had a tougher run, with the stock falling 59% in three years.

BrainChip Holdings recorded just US$75,574 in revenue over the last twelve months, which isn’t really enough for us to consider it to have a proven product. So it seems that the investors focused more on what could be, than paying attention to the current revenues (or lack thereof). It seems likely some shareholders believe that BrainChip Holdings will significantly advance the business plan before too long.

As a general rule, if a company doesn’t have much revenue, and it loses money, then it is a high risk investment. There was already a significant chance that they would need more money for business development, and indeed they recently put themselves at the mercy of capital markets and raised equity. So the share price itself impacts the value of the shares (as it determines the cost of capital). While some such companies do very well over the long term, others become hyped up by promoters before eventually falling back down to earth, and going bankrupt (or being recapitalized). BrainChip Holdings has already given some investors a taste of the sweet gains that high risk investing can generate, if your timing is right.

When it last reported, BrainChip Holdings had minimal cash in excess of all liabilities. So it is a good thing that the company has looked to remedy the situation by raising more capital recently. Given the current cash position, investors must really like its potential for the share price to be up 114% in the last year. You can see in the image below, how BrainChip Holdings’s cash levels have changed over time (click to see the values). 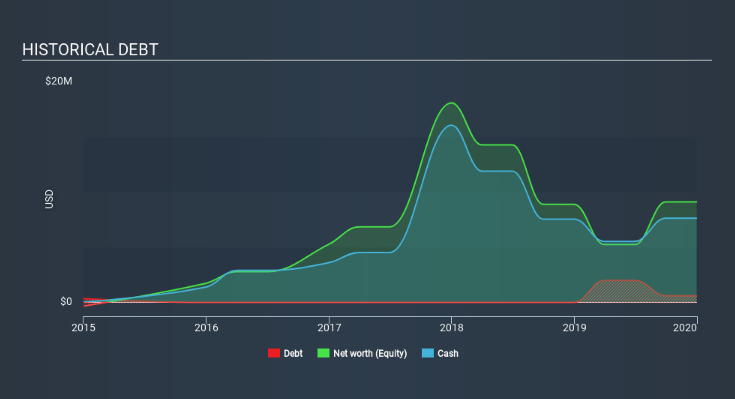 In reality it’s hard to have much certainty when valuing a business that has neither revenue or profit. One thing you can do is check if company insiders are buying shares. It’s usually a positive if they have, as it may indicate they see value in the stock. Luckily we are in a position to provide you with this free chart of insider buying (and selling).

What about the Total Shareholder Return (TSR)?

Investors should note that there’s a difference between BrainChip Holdings’s total shareholder return (TSR) and its share price change, which we’ve covered above. The TSR attempts to capture the value of dividends (as if they were reinvested) as well as any spin-offs or discounted capital raisings offered to shareholders. BrainChip Holdings hasn’t been paying dividends, but its TSR of 76% exceeds its share price return of 68%, implying it has either spun-off a business, or raised capital at a discount; thereby providing additional value to shareholders.

We’re pleased to report that BrainChip Holdings rewarded shareholders with a total shareholder return of 76% over the last year. This recent result is much better than the 25% drop suffered by shareholders each year (on average) over the last three. We’re generally cautious about putting too much weigh on shorter term data, but the recent improvement is definitely a positive. While it is well worth considering the different impacts that market conditions can have on the share price, there are other factors that are even more important. Take risks, for example – BrainChip Holdings has 4 warning signs (and 1 which is significant) we think you should know about.

Of course BrainChip Holdings may not be the best stock to buy. So you may wish to see this free collection of growth stocks.

Please note, the market returns quoted in this article reflect the market weighted average returns of stocks that currently trade on AU exchanges.